The linear regression is computed (on each column of your second input file – the one containing shape data).

You cannot enter raw coordinates as a “shape” file: please compute yourself the shape variables (Characterization), either ORP or NEF, and use as your second input file either their PC (first PC, generally) or the first DF in case of discriminating groups. Corresponding size data will be CS or PER/ARE, to be entered as the first input file. 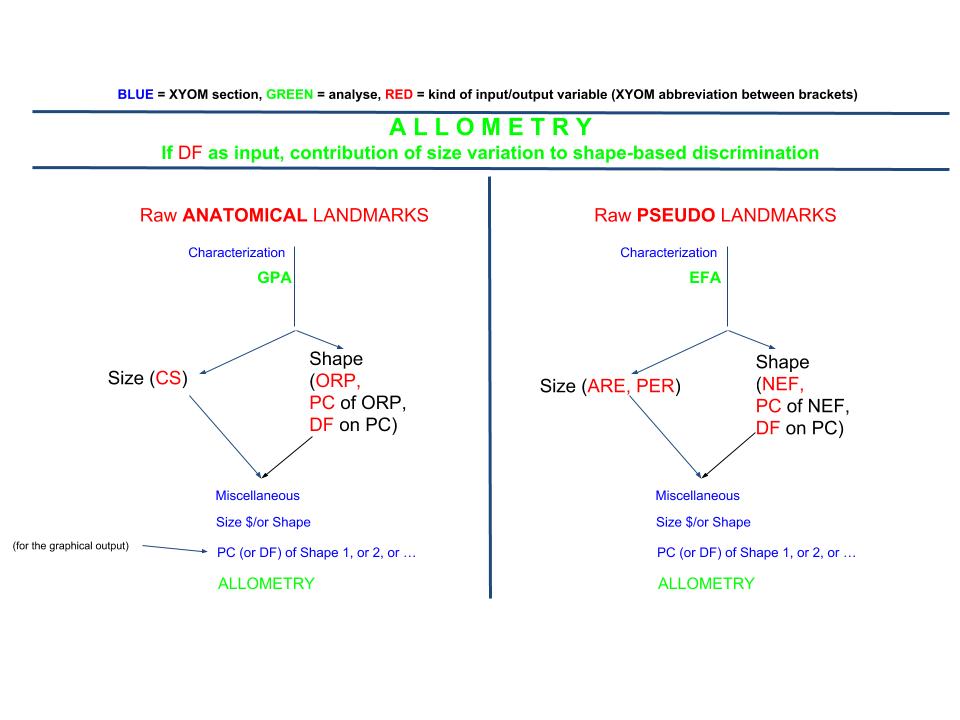 COMPARISON of VARIANCES according to the Garcia (2012) method

Data are characters (generally shape variables, either ORP or NEF, or their PC) from which the covariance matrices are to be compared.

Important remark: Please be careful when it is about landmark-based shape data: they have to be computed on the concatenated files of raw coordinates and submitted to principal component analysis before to be reorganised into the two input files mentioned above.

For details and interpretation, please see : Garcia, C. A simple procedure for the comparison of covariance matrices BMC Evolutionary Biology 2012, 12: 222

S1, S2 and S3 statistics are computed on the eigenvalues expressed as proportions of the total variance, and divided by 8 (the maximum for S1) so that they could vary between zero and 1.

Escoufier’s coefficient: COVARIATION of SHAPE of two parts of the same body (eg. head and wing)

Two files, having the same number of rows (they correspond to the same individuals)
Variables are shape variables describing for each individual two (successive) different parts of the body. These shape variables have been computed separately, for example one set for the head, the other for the wings.
In both files the order of individuals must be exactly the same (the program will concatenate the two sets by columns).

WARNING: A standardisation step is necessary for external parameter data

Analyses & Output: as above

The statistical method followed by XYOM for the estimation of shape repeatability is the Procrustes ANOVA (Goodall, C.R. 1991. Procrustes methods in the statistical analysis of shape. Journal of the Royal Statistical Society B 53:285-339; Christian Peter Klingenberg, Grant S. McIntyre and Stefanie D. Zaklan. 1998. Left-right asymmetry of fly wings and the evolution of body axes. Proc. R. Soc. Lond. B. 265, 1255-1259)

INPUT. Two files containing the same individuals. In both files the order of individuals is exactly the same.

WARNING: for anatomical landmarks (LM), size and shape must be computed on the total sample of raw LM (the first digitisation set followed by the second one). The two input files are then extracted (or “splitted”) from the size output (if it is about size repeatability), or from the shape output (if it is about shape repeatability). Please consider the illustration below:

WARNING: for size or for shape obtained from pseudolandmarks (outlines), there is no special need to merge the raw coordinates to produce (size and) shape variables from the two digitisation sessions. The normalized elliptic Fourier coefficients (NEF, or shape variables) may be computed individually, they do not depend on the total sample parameters.

Selecting columns from a given file

A new file is created corresponding to the range of columns you indicated.

Selecting rows from a given file

A new file is created corresponding to the range of rows you indicated.

Input: 2 files, same number of columns (or not if they are outlines files)

Output: A new file is created merging the two files by rows

Output: A new file is created merging the two files by clolumns